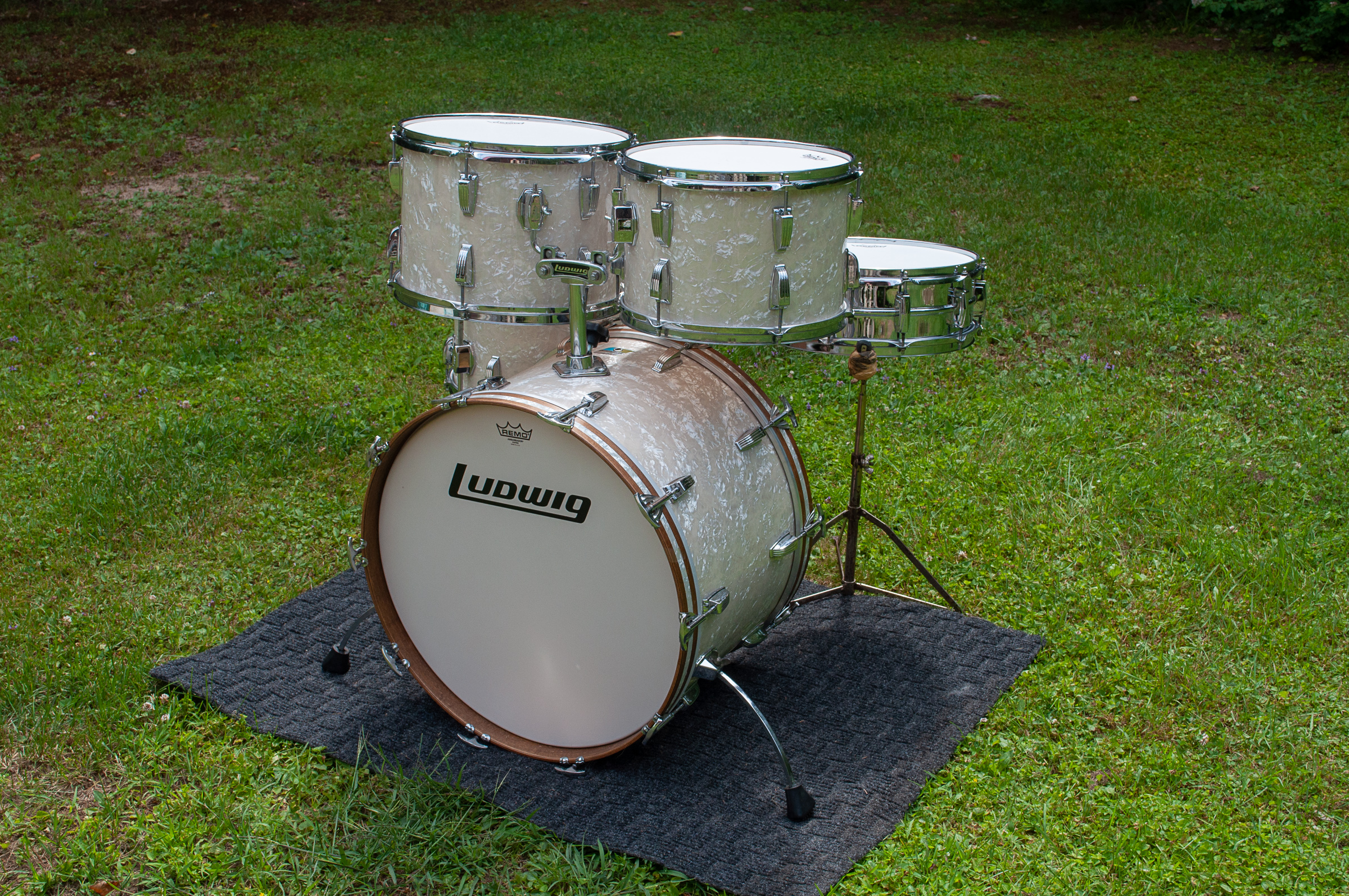 This was the perfect kit for me to start with. Most of the work needed was cosmetic. The shells were in great shape, and most of the hardware was there, intact, and in good shape. I knew the bearing edges would need a little touch up, as the bottom heads had been off for years (yes, the concert tom era). Click on any thumbnail for a larger view, or to start the slideshow. There are a few notes in the slides, and a narrative below.

I don’t know the complete history of these drums, but I do know a little. They were bought new in Winnipeg, round-about 1975. I bought them from the 2nd owner, who moved them from Winnipeg to the greater Toronto area later on. They were used for some serious gigging over their lifetime, rumour has it some with members of the Guess Who. For many of their last 20 years, they were used by the 2nd owner, who was a weekend warrior doing small bar and corporate gigs. I found them by putting an ad out in a few major Ontario cities, looking for vintage drums that were sound but in need of a little TLC. This would be my first forray into vintage instrument restoration, a hobby I’d like to take into retirment. The 2nd owner contacted me. He had decided to retire from playing, had just moved into a condo and space was tight. He liked the idea of what I wanted to do. After a couple emails back and forth, I made the trip down to Mississauga to pick them up.

This was the perfect kit for me to start with. Most of the work needed was cosmetic. The shells were in great shape, and most of the hardware was there, intact, and in good shape. I knew the bearing edges would need a little touch up, as the bottom heads had been off for years (yes, the concert tom era). There was also a larger 26″ virgin bass drum included, which I wasn’t interested in, but I found a buyer for that immediately and sold it as it was. When I got things home and had a better look, I realized what good condition they were actually in. Even the bottom bearing edges were only going to need a little dressing. It was mostly going to be cleaning hardware, and of course… the removing of the old wrap and applying of the new.

The shells are 6-ply maple, and quite heavy. The 16″ floor tom was a bit of a mis-match. It is a lighter maple shell. My research indicates that the 16″ tom might be a little older, but possibly not. Ludwig made 3-ply shells (maple/poplar/maple) earlier, and then concurrently with the 6-plys of the mid-70’s and then switched to other styles in the late 70’s or early 80’s. They are actually producing 3-ply shells again in their Legacy line. The hardware on the 16″ tom matched the rest of the kit, as did the bearing edge style. The glue under the old wrap looked a little different, while the interior finish was the same as the rest of the drums. It was missing it’s badge (which I replaced). It had also been drilled at some point for extra hardware, which I professionally repaired with dowels.

I left the snare drum in it’s box until I was almost finished the project. When I opened it up I was delighted at what I found. What I had was a 1974 Ludwig COB Supraphonic snare drum, in excellant condition. With just a little cleaning and some new heads, it’s like a brand new drum. The 70’s super-sensitive Supraphonic is an iconic drum. It is the most recorded snare drum in history, and it’s design is still copied by other manufacturers to this day. It virtually tunes itself, and one hit on the drum makes you lean back and smile and say, “now that’s a frackin’ snare drum”! The muffler and throw-off and butt-plate were all in great condition, rims original and in great shape, chrome shiny with no rust or pitting. A real gem!

The biggest single expense in this project was the new wrap. I searched several sources, and although there is a good Canadian provider, I ended up having to go to a dealer in Nashville to get the authentic vintage White Marine Pearl I was after. The next biggest expense was new heads all-round. The rest of the expenses included new maple hoops for the bass drum (one was missing and the other in terrible shape) and missing hoops for the resonator sides of the tom drums. Although I was not able to get actual Ludwig hoops to replace those, I was able to get accurate reproductions from the provider in Nashville. Then of course are the many, many hours I put into takng things apart, sanding and cleaning, re-wrapping, polishing, lubricating hardware as I re-assembled, and so on and so on.

In the end, will I make any money on this project? Probably not if I really factor in all my time. Definitely not if I start to play them and then cannot bring myself to sell them 😉 At the end of the day, I hope to recover my costs and earn enough for my labour to encourage me to try this again. I’m not sure I want to tackle removing a Ludwig finish again any time soon though 🙂